David is Training Dogs to be Super with Positive Dog Training

David Carter is following his passion, working with dogs and offering positive dog training thanks to support from St Helens Chamber’s start-up team and the Enterprise Hub.
From a young age David grew up with a family dog in the home and always had a passion for training and caring for his canine companions. After the death of their first family dog, David’s family started adopting rescue dogs, all of which David took to training and behaved exceptionally. 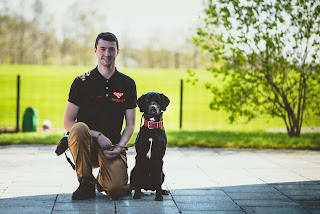 After the passing of one of their rescue dogs, David decided to get a puppy, Flash, so he could have the challenge of training a dog from birth and demonstrate what you can achieve using only positive training methods.
Prior to starting his own business David worked in an administration role, climbing further up the managerial ladder. He realised he wanted a job that made him feel a sense of achievement, so began the journey of setting up his own business.
David explained: “I first approached the Chamber with the hope of getting some sort of funding and advice to get the ball rolling.
“Starting a new business, I didn’t know what I was getting into, so the most important thing for me was to understand the business side. I’d never done my own taxes and didn’t know how to get started on that.
“I understood how to realistically make a business plan, but the support from the Chamber opened my eyes to a depth of it that I didn’t see.
“There are things you don’t know about until you look into it in a certain way. The support helped me to look down the right avenues and investigate the right things so that I could find an accountant and a bookkeeper who could give me advice.
“When it came to the specifics of working with dogs the Chamber weren’t necessarily the right people to talk to, but when it came to running the business, liability insurance and VAT rates, they really opened up my eyes as to how much more work goes into the process.”
David was invited in to meet with a dedicated business start-up adviser to discuss his business plan and attended a series of free start-up Workshops, designed to teach him the tools for becoming self-employed.
“The guidance I received from my start up adviser Steve was really useful. He helped me to narrow my view from this scatter brain idea of ‘I could do this and this’ to break it down and say ‘yes, you could do that, but is it productive in the short term, if you focus on x you can cover all your bases – marketing, income, expenditure.
“He really helped me to align my goals and come up with a realistic frame so we could start at A and work to Z instead of the other way around.”
Superdogs offers a range of Dog Training classes including one-to-one sessions, residential training and group sessions, as well as training the dogs, Superdogs also sells equipment such as leads and balls.
When he initially visited the Chamber, David went in with some very ambitious plans of opening a dog hotel, spa and restaurant with a menu for humans and a separate menu for their canine friends.
“When I first met Steve the first thing I said was ‘I think I need North of one million pounds’ and he just laughed. Looking back now, I would too.
“I didn’t know what the Chamber was about, I just told him this is my ultimate goal and what I want and he helped me to narrow down that 25 year goal and make it into a more realistic 5 year goal.
“Within the first year Superdogs has quickly surpassed what I thought we’d achieve, I’ve gone from having no intention of taking on staff to now tripling the size of the business with two extra staff members.
“We have recently expanded into Warrington and the Wirral, as that is where one of my new trainers is based. We are tackling the North West first and then hopefully one day we can take on the world. I’m looking to rent or purchase a field so we can have our own space for outdoor classes.
“I have also been working closely with No More Kennels a luxury dog spa and hotel in Warrington where we deliver some of our group sessions. They have a really great set up with an indoor AstroTurf that we use to train the dogs.”
David has aspirations to grow the business over the next few days with the hope of one day owning his own premises and spa. He also plans on training a team of show Superdogs to educate people about traditional dog training methods.
St Helens Chamber is part of Enterprise Hub, the enterprise gateway for business start-up support in Merseyside.  Offering expert advice and support to anyone thinking about starting a business including help to:
Enterprise Hub is part funded by the European Regional Development Fund and offered FREE to residents of the Liverpool City Region. For more information on how to get support to start your business call 0151 706 8113 or email enterprisehub@thewo.org.uk