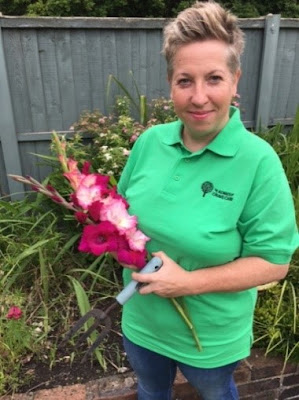 After losing several close family members over the last couple of years, Gail recognised what an important part of the grieving process a loved one’s final resting place can be. She noticed that quite a few grave sites were becoming overgrown or had dead flowers on the headstones. After a bit of research, Gail was saddened to learn that a lot of people didn’t live close enough to regularly maintain graves and that this was the cause of some guilt and frustration.

As people move away from areas for work or family reasons, this is becoming a common scenario! Gail had the idea for her business three years ago, but at the time was working for the NHS and wasn’t sure about giving up her job. She knew that redundancies were looming and started to look into her idea by carrying out some market research.

Gail was encouraged by the positive responses that she received, but was dealt a blow when she found out that she had breast cancer. After receiving treatment and being given the all clear, Gail took redundancy from her position and decided that she wanted to pursue her dream of having her own business.

She contacted Alt Valley Community Trust earlier in the year and started working with the Enterprise Hub team, receiving one to one support. Gail got help with completing her business plan, putting together her financial forecast so she could decide if her idea was viable. She was also signposted to banking, loan and website services and undertook training in keeping records for tax.

Gail was relieved to know that there was assistance for her at the early stages of start-up. She said: “If it wasn’t for the help that was available through the Enterprise Hub, I wouldn’t have known how to get started, where to go for a website or what prices to charge, I am really grateful for the service I received.”

Alt Valley Trust are a partner of Enterprise Hub. Based in North Liverpool, their work helps some of the most disadvantaged communities in Merseyside. They have a business support team that works with new and growing small businesses to help them secure employment and take on staff.